Rustic and simple, White Bean, Sausage and Kale Soup has minimal ingredients and loads of flavor. I’m totally a summer person and when the weather starts to turn and the days get shorter, the only thing I can really get excited about are the big pots of soup simmering on the stove. This soup comes together in one pot and in less than an hour, you’ll be cozied up with a big bowl of deliciousness.

My version of White Bean, Sausage and Kale Soup is brothy, full of hearty ingredients and heavy on the kale. I’m all about packing in extra veg into dishes wherever I can. The super flavorful base starts with searing the sausage and then caramelized onions and leeks in the same pot. Deglaze with a little bit of crisp white wine and simmer for a bit to allow the flavors to meld. The thinly sliced leeks just melt into the broth and it’s oh so good. Beans and a bunch of kale are added in toward the end to warm through and wilt. Top with copious amounts of parmesan and serve with crusty bread and you’ve got yourself the perfect bowl of soup. Vegetarian? You could leave out the sausage and honestly, it would be just as good.

This is a smaller batch soup recipe and makes about four hearty servings. You can definitely double it if you’re feeding more people or would like to have some for leftovers. It’s brothy and freezes wonderfully. 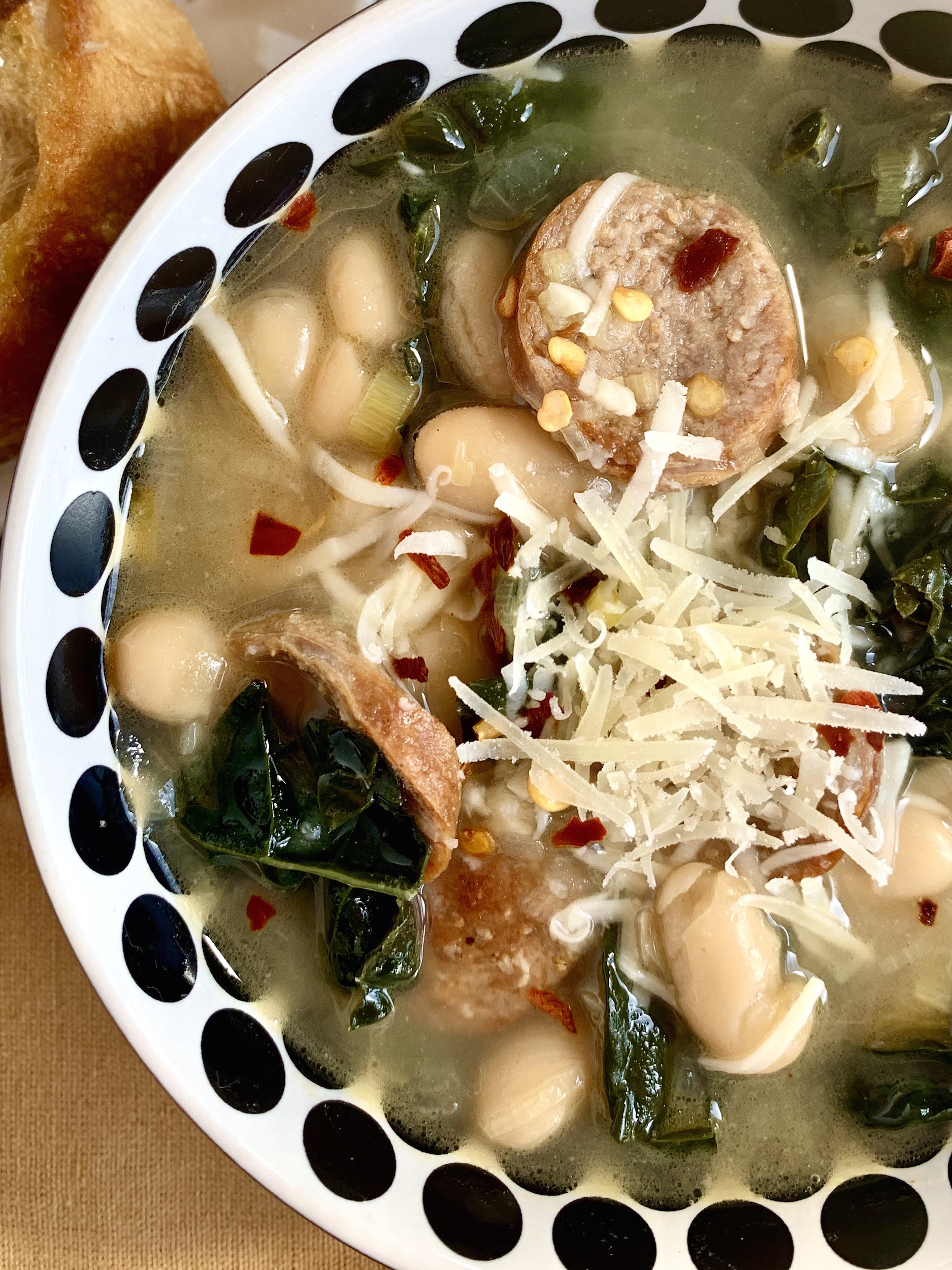 What do I need to make White Bean, Sausage and Kale Soup?

Cannellini Beans – Seeing the term “white beans” in recipes can be confusing. There’s Cannellini beans, Navy beans, Great Northern beans and baby Lima or “butterbeans”. All of them have a slightly different flavor and size but in general, they will all work for any recipe that calls for white beans. I like to use Cannellini beans. They are the largest out of the bunch and have the traditional kidney shape. Cannellini beans are meatier than Navy and Great Northern beans and have a rich, nutty flavor that’s found in many Italian dishes – think Minestrone soup! They keep their shape and texture well and don’t mush up too much when added to soups, stews, chili and salad. I order a lot of my beans and other pantry staples from Thrive Market so I always have soup ingredients on hand.

Italian Sausage – You can go with spicy or mild for this recipe depending on your taste. I recommend going with mild and then adding red pepper flakes for spiciness. I also prefer the look and texture of sliced and seared sausage rounds as opposed to crumbled sausage but either will work just fine. I’ll explain how to use both of them.

Kale – I use one whole bunch of Lacinato kale. Lacinato, Tuscan or Dinosaur kale is the dark, flat leaf variety. Not the curly stuff. As mentioned before, I add extra kale to this recipe to pack in the veg but you can add as much as you like.

Leeks – Leeks have a mild, onion-like taste and they are absolutely delicious. Make sure you clean them well as dirt and grit can get trapped between the tiny rings. The edible part is the white part but the greens, although not edible, are great to use for flavor when making your own veggie or chicken stock. You can also regrow them from the root, just like scallions! I believe that leeks are the most underrated vegetable and should be used way more often. Check out this article from The Kitchn to get more leek inspo.

Onion – Just a small sweet or yellow onion. If you have a big one, use half. You want about 1 cup of diced onion.

Chicken or Veggie Broth – If you have low sodium chicken broth, use that. The sausage adds a lot of salt to the broth as it cooks, so using low sodium will help you have more control over the seasoning. I typically always have Imagine Organic Low Sodium Chicken Broth on hand.

White Wine – A little bit of white wine adds a whole lot of flavor in this recipe. Definitely recommended but also fine to omit if necessary.

Red Pepper Flakes – Kick it up a bit.

Parmesan – An unapologetic amount should do.

Lots of crusty bread for dipping – live your best life.

Never worked with leeks before? Here’s what you do.

If you’ve never cooked with leeks before, it can look a little intimidating, but it’s super simple and once you try it, you’ll be looking for more recipes to use them. You simply cut off the root end and remove the green part where it starts to darken. This recipe uses half of a big leek so I cut it lengthwise and slice thinly into little half moons. You want to rinse them extremely well in cold water to remove any grit between the rings. That’s it! What should you do with the rest of that leek? I highly recommend you sautéing and adding it to some eggs the next morning. The possibilities are really endless. 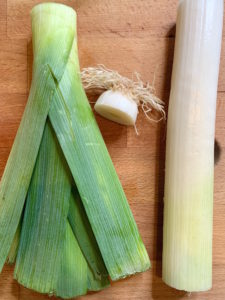 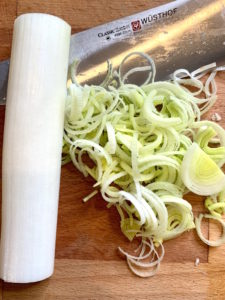 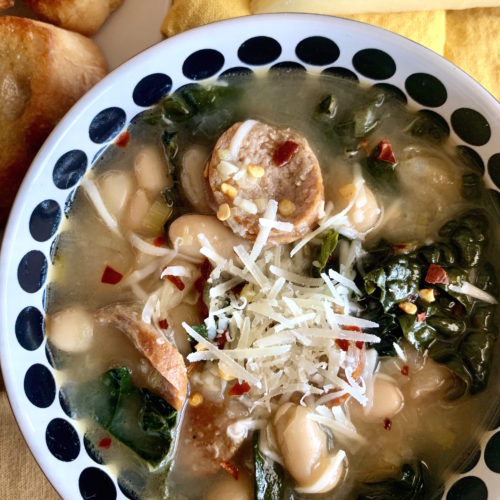 For this recipe, I highly recommend using low sodium broth. Depending on how salty your sausage is, you may not need any additional salt. Wait until the end to check for seasoning before adding any additional salt.
Keyword cannellini beans, easy soup recipe, italian soup, kale soup, sausage soup, white bean sausage and kale soup, white bean soup
Tried this recipe?Let us know how it was!
« Simple Roasted Broccolini
Butternut Squash Stuffed Shells » 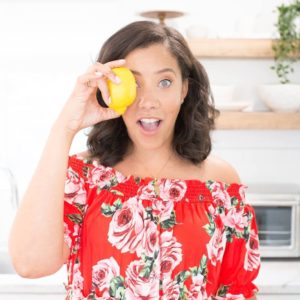 Welcome! I love creating delicious, healthy-ish food at home with simple, whole food ingredients. I’m self-taught and spending time in the kitchen is my creative release.

The essential tools for a simple, well equipped kitchen and the must have ingredients for a well stocked pantry, fridge and freezer.